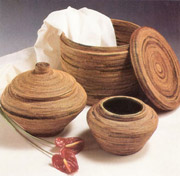 The island-province of Camiguin is a pear-shaped volcanic island in the northern tip of Mindanao. It is approximately 90 kilometers north of the City of Cagayan de Oro. It is bounded to the north by Bohol Sea, to the west by Macajalar Bay, to the southeast by Gingoog Bay and to the east by Butuan Bay.

Camiguin is the smallest province in Northern Mindanao, with its land area pegged at 29,187 hectares. It is composed of five towns, namely, Mambajao – the capital town, Mahinog, Guinsiliban, Sagay and Catarman. The island plays host to seven volcanoes, including the still-active Mount Hibok-Hibok. According to the National Statistics Office, Camiguin has a total population of 74,232 persons, making the province the second smallest in the Philippines in terms of population.

Among the Province's major products are coconut, cassava, banana, camote, palay, corn, fruits, coffee and vegetables. Camiguin's volcanic soil has proved to be a fertile ground for planting various crops. At present, the Provincial government is looking into an agricultural program that would increase the cultivation of fruit trees and vegetables in Camiguin. The Province is also among the best abaca fiber producers in the country. Camiguin is proud of its natural resources, which include sulfur deposits, geothermal energy, agricultural lands and fishing grounds.

The Camiguin culture is a mixture of both Boholano and Cebuano culture. It is very colorful and creative. The people are deeply religious, hospitable and friendly. Cebuano is the major dialect in the Province. However, in the towns of Sagay and Guinsiliban, where most of the indigenous tribes reside, the Kinamiguin dialect is still spoken. Kinamiguin is derived from the Manobo dialect with some mixture of Boholano.